orman Cherner is the mastermind behind those elegant and shapely chairs made of curved plywood, also known as the Cherner Chairs (and not to be confused with the similar Pretzel Chairs by George Nelson). The Cherner Chair was originally launched in 1958 by US company Plycraft and stayed in production until 1970.

Born in 1920 in Brooklyn-New York, Norman Cherner studied Fine Art at Columbia University. From 1947-1949 he was an instructor at the Museum of Modern Art (MoMA). It was here that his interest was piqued for the Bauhaus movement. He studied multi-disciplinary design, from architecture, furniture, glassware to lighting. And Cherner was one of the stars of a generation of designers that explored all the post-war technological innovations in architecture and industrial design. Due to increasing prosperity and the baby-boom at the time, Cherner wanted to make affordable design a reality for all. So like Le Corbusier, he designed the whole package: pre-fab housing, furniture and decorative items.

But it is the plywood chair that Cherner is most known for. Like I mentioned before, it looks a lot like the Pretzel Chair by George Nelson. And there is a reason for that. Originally, Nelson’s Pretzel chair was manufactured by Massachussets-based company Plycraft. But it turned out that his design was too complicated and costly to produce. Plycraft ended up with the materials and techniques for constructing plywood furniture and they did not want them to go to waste. So Paul Goldman, owner of Plycraft, hired Cherner to create a more sturdier and affordable design. But as soon as Cherner handed in his design, he was fired with the message that Plycraft would not produce the chair after all. A few months later, Cherner saw his own design for sale in a showroom. The label on the chair mentioned the manufacturer Plycraft with the designer’s name: Bernardo…. Cherner sued Plycraft in 1961, won the case and rightfully received royalties and credit ever since.

After production ceased in 1970, for the next 20 years Cherner’s chairs were only seen in galleries, musea or in the houses of a few savvy collectors. But in 1999, Norman’s two sons incorporated the Cherner Chair Company. Since then these elegant beauties (and other designs) have been re-issued and are produced again using the original drawings and specifications. The pieces are manufactured with the same attention to detail as the original hand-made classics. As you can see from the following selection of images, Cherner’s designs are timeless and they combine well with any interior style.

A Cherner used as desk chair in the home of Danish Sofie Christensen Egelund, granddaughter of the founder of the VIPP company (of the pedal bins fame) -via My Scandinavian Home

Design Icons galore, the Cherner chairs, the Serge Mouille light fixture. Anyone knows the designers of the table and pendant lamp? – via I Am The Lab

Room with a view – via RUM4

And finally, a George Nelson Pretzel Chair, the one that did not make it with Plycraft – styled by German Wolfram Neugebauer 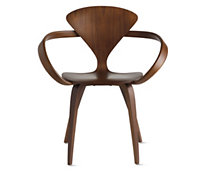 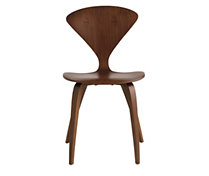 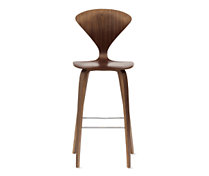 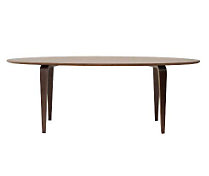