he Diamond Chair, also known as the Bertoia Chair, was one of the important innovations in furniture design during the 1950’s. It was designed by American artist Harry Bertoia, born in Italy in 1915. At age 15 he emigrated with his brother from Italy to Detroit. He enrolled in the Cass Technical High School where he studied art and design.

It was here that he learned the art of jewelry making. He continued his studies at the College for Creative Studies and in 1937 he received a scholarship for the Cranbrook Academy of Art. Here he met his future fellow Design Icons Walter Gropius, Ray and Charles Eames and Florence Knoll.

Harry Bertoia was a complete and gifted artist. Historian Brian Lutz once said: “Bertoia’s paintings were better than his sculptures. And his sculptures were better than his furniture. And his furniture was absolutely brilliant.” Bertoia moved to California in 1946 to help Charles Eames with inventing the laminating and bending of plywood. Bertoia’s contributions to the famous Eames chairs were crucial but this is not very well known.

In 1950, Florence Knoll (of the Knoll furniture manufacturer) asked him to move East and work with her and her husband Hans. They never demanded that Bertoia design furniture, but instead encouraged him to explore whatever he liked. And after two years the Bertoia Collection was born. Introduced in 1952, the designs were an instant hit and are still recognized worldwide as one of the great achievements of 20th century furniture design.

The proceeds from the sales of the Bertoia Collection allowed Bertoia to explore other fields of art. He devoted himself exclusively to sculpture and produced over 50 public commissioned sculptures over time.From the 1960’s he began experimenting with sounding sculptures of tall vertical rods on flat bases. He even produced a series of 11 music records, all entitled “Sonambient”. You can listen to this unworldly music by clicking the YouTube video at the end of this post. Unfortunately, Bertoia died too soon, at age 63 from lung cancer. His motto was:

The urge for good design is the same as the urge to go on living. The assumption is that somewhere, hidden, is a better way of doing things.

Diamond chairs on the roofterrace of Hotel Habita Monterrey, designed by Joseph Dirand

Diamond chairs in the dining room

The Diamond chair paired with a Beni Ourain carpet

via The Design Traveller

(The “real deal” as well as the more affordable reproductions) 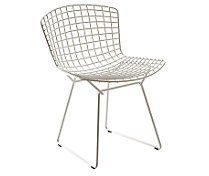 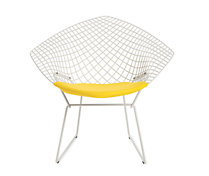 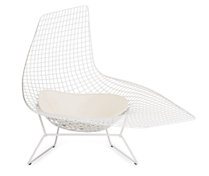 The Bertoia Asymmetric Chaise was never produced beyond prototypical form until 2005, w… [More]